A conversation with Srdja Popovic

by Eric Stoner and Bryan Farrell 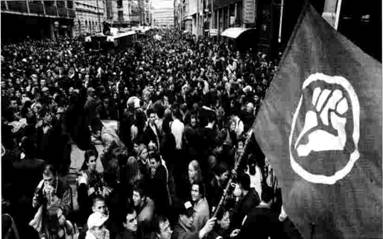 Ten years ago, on October 5, 2000, hundreds of thousands of Serbian protesters descended on the streets of Belgrade and pushed past the indifferent security forces to seize control of the Parliament building, effectively ending the dictatorship of Slobodan Milosovic. It was the final act of a two-year nonviolent struggle led by the youth movement known as Otpor, or “Resistance,” whose iconic clenched-fist led the way toward free elections and newfound democracy.

One of the leaders of this movement was 27-year-old Srdja Popovic, who after Milosevic’s overthrow was elected to the Serbian Parliament. In 2004, Popovic left politics to found the Center for Applied Nonviolent Action and Strategies (CANVAS) in Belgrade, an organization that has trained activists in dozens of countries around the world – from those involved in the successful pro-democracy movements in Ukraine and the Maldives to the ongoing struggles in Burma and Iran.

We recently had the opportunity to sit down with Popovic and ask him about the role that humor played in the struggle against Milosevic, how they were able to win over his feared security forces and the ways in which Otpor lives on today.

Waging Nonviolence: Why was it important that resistance to Milosevic be nonviolent?

Srdja Popovic: Nonviolent discipline is one of the key principles of success in nonviolent struggle. Once violence is unleashed, a movement will lose numbers, momentum and credibility—putting the overall goals of a struggle in danger. It was crucial for Serbs, being labeled as “violent” during the 1990s, to prove to themselves and the world that we are more than capable of changing our government in a civilized manner, through elections and nonviolently protecting election results.

Also, if you look to the great Freedom House study published in 2005 called “How Freedom Is Won”, it analyzes political transitions covering 35 years of the last century—some by violent means, some by nonviolent means. It clearly proves that those transitions won by nonviolent struggle are far more likely to guarantee human rights, democracy and long-term political stability.

WNV: How important was creativity and humor in the struggle to bring down Slobodan Milosevic?

SP: Absolutely crucial. Humor and satire, trademarks of Otpor, were efficient in pushing a positive message, attracting the widest possible audience, making our opponents—those grey and square-headed bureaucrats—look stupid and ridiculous. Most importantly, it broke the fear and inspired the tired, disappointed and apathetic Serbian society at the end of the 90s.

WNV: How important was appearance and image for the movement in deflecting criticism from regime and media?

SP: Spin-doctors say “perception is reality,” which is definitely not far from true. Having in mind that regime propagandists would try to portray Otpor as “mercenaries of The West”, “non-patriots” and “right-winged traitors,” we were able to prepare for this early in the process. We used the clenched fist, a leftist symbol deriving from the old communist times of our grandfathers, sound patriotic slogans, bright young faces as front-liners for Otpor, which were similar to what MLK was performing in his Nashville marches. The regime had spent a lot of time persuading the public that we were actually worse than real terrorists, but seeing young bright faces wearing Otpor t-shirts made this accusation look ridiculous and, in the end, it clearly backfired on them.

WNV: How did Otpor win over the police and security forces? What role does persuasion play in civil resistance?

SP: It is crucial for nonviolent movements to pull people out of the pillars of force like the police or military, rather than push people toward them and appear threatening and aggressive. Otpor learned this lesson from student protests in 1996 and 1997, but also from Gandhi. From the very beginning, we acted in a very fraternizing manner toward the police and army, carrying flowers and cakes to them, rather than yelling or throwing stones. This model has worked efficiently throughout the world in places like Georgia and Ukraine. Once you understand that “policemen are just men in a police uniforms” your perception changes and persuasion takes place.

WNV: How was Otpor’s leadership structure different from other nonviolent movements?

SP: It was a “collective leadership” with the structure of a “political/electoral” campaign that was highly efficient in carrying out decisions. It was also wholly decentralized, developing lots of layers of leadership so that if the top 10-15 people were arrested, the large movement machine wouldn’t stop working. It gave an opportunity for young and new members to speak out as “leaders of Otpor.”

WNV: Did NATO’s bombing of Serbia weaken Milosevic and embolden the nonviolent movement in any way?

SP: Attacking a country from the outside always results in rallying people around leadership. That happened during the NATO bombing of Serbia in 1999, clearly strengthening Milosevic. If you look at George W. Bush’s approval ratings, you will find they reached their highest right after 9-11. So whoever in the US administration had the idea that bombing Serbia would weaken Milosevic was absolutely wrong. It only ended up hurting the country and its civilians. Even worse, Milosevic used it to attack and destroy whatever was left of the opposition under a state of emergency (martial law was proclaimed during the bombing!). Prominent Serbian journalist and editor Slavko Curuvija was killed in front of his home after being publicly accused of “cooperating with those who bombed Serbia.” Opposition politician Zoran Djindjic and most of the Otpor leadership fled the country, being physically threatened by secret police. The lesson here is “democracy is not coming on the roof of tank.”

WNV: How important was US support for Otpor to its success and do you recommend that other nonviolent movements accept funding from the US government or government-funded agencies?

SP: The West’s role in the Balkans has its bright and dark sides, and I think those should be judged separately. Yes, the US and EU helped Serbian opposition with material resources in the last few years of the 90s. More than anything, they helped with free media and training election monitors. They also provided opposition-run municipalities with oil for heating its citizens. But those same “Western democrats” also supported Milosevic prior to the 1995 Dayton peace agreement in Bosnia and enacted the 1992 economic embargo, which almost destroyed the middle class in Serbia and allowed Milosevic and his allies in the police and organized crime to gain a stronger grip. Western diplomats  tried to micromanage the Serbian opposition, which created fragmentation. Acting that way, the international community was for years part of the problem rather than part of the solution. It took a hell of a lot of time and energy to fix that.

On the other hand, one must not underestimate the role of US pro-democracy efforts worldwide, as the leading democratic super-power. The lesson from Serbia—as my organization, the Center for Applied Nonviolent Action and Strategies (CANVAS) sees it—is you need to cultivate external support. If you want successful revolutions, you need to get foreigners, like diplomats and so-called “experts”, out of your struggle and away from its decision making process. But knowledge and technology can help, which we have learned sharing knowledge and experiences with many pro-democracy activists around the globe, including Georgians, Ukrainians, Lebanese, and Maldivians (to name those who have succeeded in a struggle for change), as well as Zimbabweans, Burmese, Iranians and Venezuelans (whose dramatic struggles are still very visible around the globe). Every time we get this question our message is the same: foreign governments don’t have friends, only interests. So try to cultivate external support, get the knowledge and material resources from those offering it and use it for your movement’s mission. But beware of their political advice because successful revolutions are only those which are home grown, designed and followed by local people in a certain country.

WNV: What did the movement do after the revolution to hold the new government accountable?

SP: Otpor had a very important “watch dog” role after the revolution. It was launching two important campaigns (November 2000 and summer 2001) holding the new government accountable, pressing for democratic reforms and fighting corruption. Less known is the huge movement’s role in preparing the public opinion for ex-president Milosevic’s arrest and his delivery to The Hague Tribunal. The name of the campaign, running from March and early April prior to his arrest, was “HE IS GUILTY!” It was a crucial moment because the brave new Serbian prime minister Zoran Djindjic was practically standing alone on this necessary but highly “unpopular” task at that point.  All those things show that for having a real democratization revolution itself is not enough. You need to follow up with capacity building and strengthening the democratic institution to get to a democratic society. Serbia was lucky to get it, and sometimes I think that some other countries like Georgia were really missing part of this “post traumatic” support from both their leading nonviolent movements and world democracies.

WNV: What is the significance of Otpor globally and how do you see it alive around the world today?

SP: Otpor and the Serbian nonviolent revolution has really become a worldwide recognizable brand. You will find successful examples of similar movements in Georgia (2003), Ukraine (2004), Lebanon (2006) and as far as the Maldives (2008). You will find the same symbols and visual identity in Egypt and Kenya. You will find Buddhist monks leading the Saffron Revolution inspired by the movie Bringing Down A Dictator. You will find similar strategically-run nonviolent movements in Venezuela and Vietnam. You will find books and movies distributed widely in Cuba and Iran. It seems that the idea and model of “nonviolent revolution” has inspired many people and some of them have successfully implemented bright and creative tactics thanks in part to the movie Bringing Down A Dictator, a series of books including “Nonviolent Struggle: 50 Crucial Points”, and most of all the bravery and interest of local activists worldwide. That makes us proud because we strongly believe that every man and woman in the world has the full right but also a duty to stand for human rights and democracy.